‘Egg, Inc.’ Review – The Secrets of the Universe Are Short Lived

Make no mistake — Egg, Inc. is a clicker game through and through. That doesn’t necessarily make it a bad game, however; with a lighthearted tone and a mellow style that takes clicker gameplay mechanics and polishes it to a sheen, Egg, Inc. is a game that’ll keep you coming back for more and more, if only for a short while.

You start out with a simple farm, raising hens and hatching eggs by merely clicking a button. It’s a red and largely intactile button. As you progress within the game, you can eventually unlock the ability to hold the button to hatch eggs rather than click it; a welcome upgrade from the monotonous clicking that turned me off from many clicker games. You can even make the button bigger if you so choose, giving you more screen estate to blindly place one finger while another can perform all the upgrading, building, and so forth. These small yet substantially important improvements over the generic clicker game are a wonderful representation of just how innovative Egg, Inc. can be in a tired and claustrophobic genre. 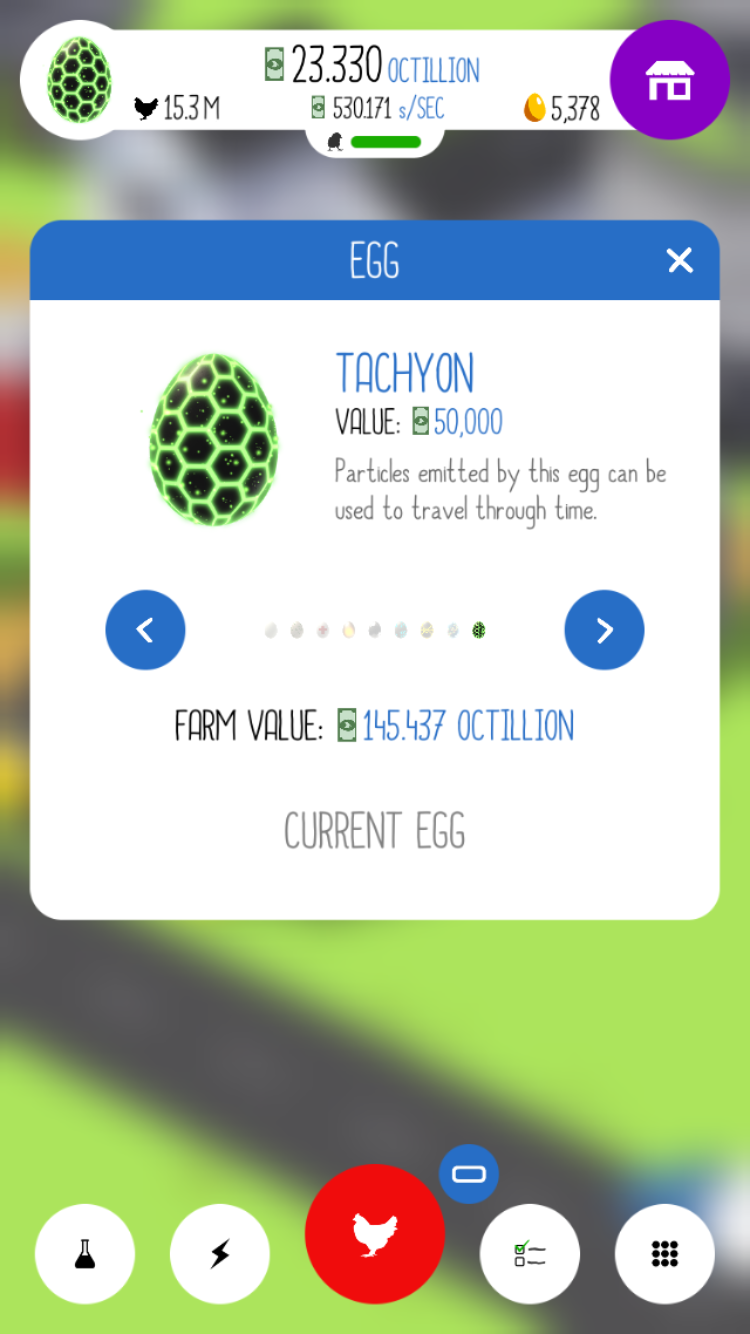 The writing, by the way, is fantastic. From the app description: “In the near future, the secrets of the universe will be unlocked in the chicken egg. You have decided to get in on the gold rush and sell as many eggs as you can.” The developers didn’t stop there, either; humor is spliced into each upgrade description, each newspaper blurb, and even each egg type that you can unlock. You’ve got your hen jokes, you’ve got your chicken jokes, you’ve got your farm jokes; all the comedy bases are covered. 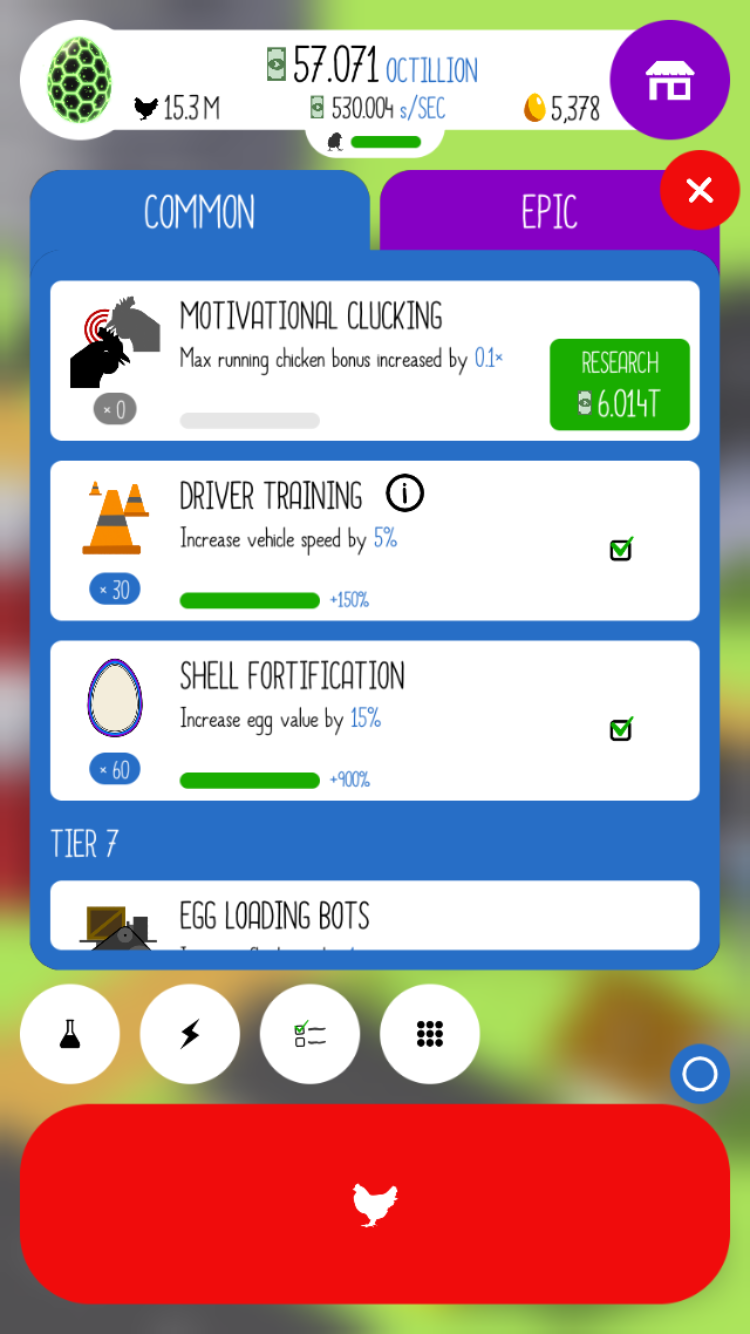 Accompanied by simple yet charming graphics, the game itself is simple, combining clicker elements with a simulation twist. As you’re managing a farm, you click (or hold, if you’ve unlocked the feature) a button with one finger while another makes sure the proper facilities are in order: if there’s enough space in the hen house, if there’s enough trucks to sell those eggs, and even if there’s enough silo space to accumulate your eggs that hatch while you’re gone. It’s a cleverly satisfying gameplay loop that manages to continuously keep you engaged as your farm gets bigger and bigger.

Unfortunately, Egg, Inc. does come with a couple drawbacks, and while there aren’t many, they significantly dampen the experience far too soon than they should. For one, if you upgrade your farm properly, you’ll still eventually end up running out of hen house space before you can earn the money necessary to upgrade. It causes a serious stalemate in the game where progression is slowed down to a point where it almost stops, and the only choice is to keep going and earn whatever revenue you can until you can upgrade your egg type. 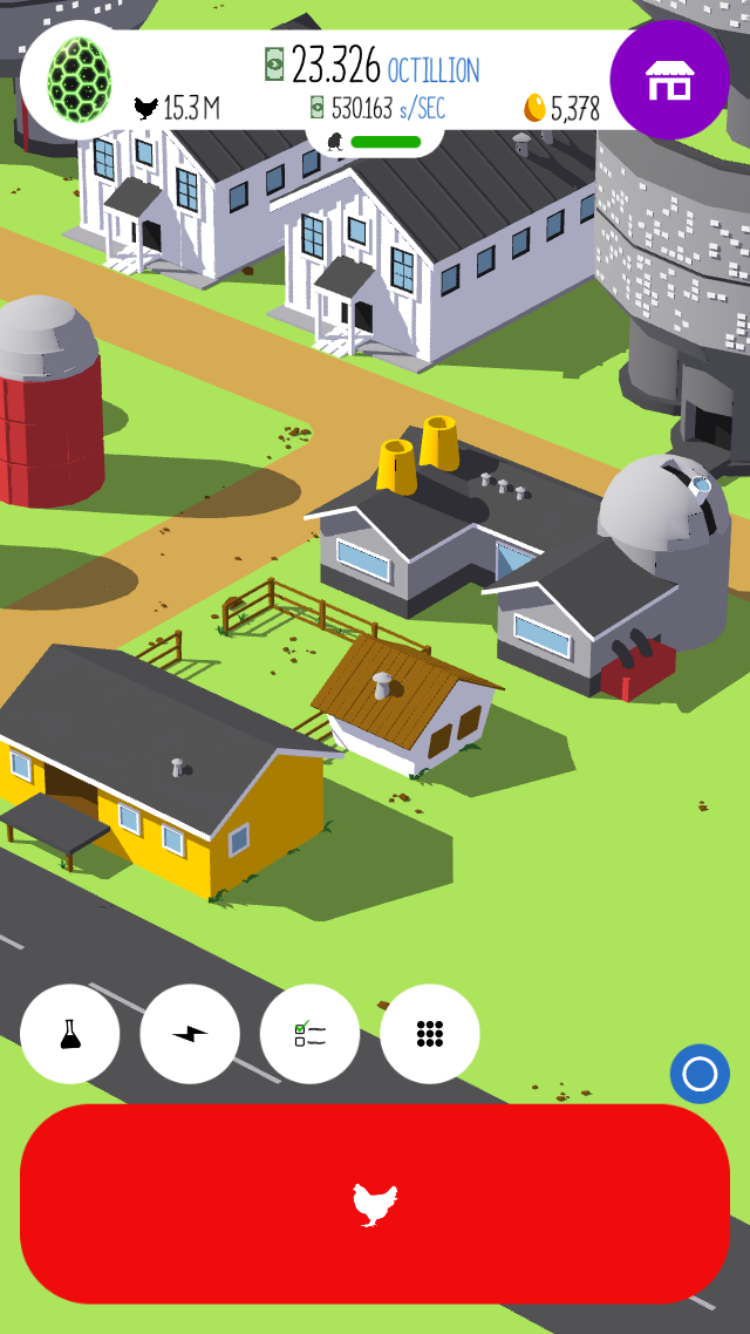 The second drawback is the fact that the game is just too short. After your farm’s value reaches a certain level, you’re prompted to restart and start a new farm with a new egg type that has a higher base value, allowing you to earn more money much quicker the next time around. This effectively functions as a New Game+, but that’s the problem. Ultimately, the gameplay loop involves you building up a massive farm, selling it, and then starting over — again, and again, and again. Egg, Inc. wears out its welcome much faster than it should, but even though I wanted to push through until the last egg type, once I did, the game encouraged me to “prestige,” where I completely restart ALL the way from the beginning of the game at the first egg type, but with a much higher earnings bonus at the start. With no end or significant reward in sight, the motivation to keep playing virtually disappears.

In the end, Egg, Inc. is a fun and charming time, if only short-lived. A satisfying gameplay loop with bits of humor spliced in is enough to keep people engaged the first couple times around, but eventually, the innovation of Egg, Inc. gives out to repetition and a lack of incentive that makes it too hard to keep going.

A budding university student who also happens to be a gamer, student, scribbler, and optimist. I talk about lots of things and I have opinions about everything. It’s nice to meet you!
@Asphelos
Previous Nukleus: circling down the drain – Review
Next Motif Mask: A puzzle with time pressure – Review

Everclick is a great little clicker game by Kingisle Entertainment.